You’ve seen plenty of reviews of Mad Max: Fury Road by now, so I’ll just cut to the chase and then skip on to the commentary like a crack-addled roo on hot sand.

It’s a great film, you should go and see it.

Remember how they said the freeway scene in Matrix Reloaded aimed to do for car chases what they’d done for gunfight? They failed. This didn’t.

Score
Style: 5/5 (I almost want to see an animated version so Brendan McCarthy’s insanity can be dialled back up to 11)
Substance: 4/5 (while very little is explicitly explained and a lot isn’t shown, the whole all hangs together very nicely)
Total: 4.5/5

With that out of the way, let’s delve into the themes, design, mythology and all the rest of the film.

Fury Road is an ‘important’ film and looks on course to be a near-universal, critical success – if not necessarily an immediate financial success (earning 2/3rds of what Pitch Perfect 2 has on opening weekend, which is a fucking disgrace). 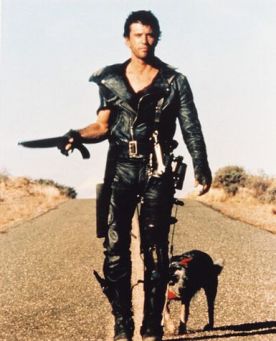 The Mad Max timeline is pretty straightforward for the most part, though hard and fast timelines are hard to come by. If we take year 0 of the collapse of civilisation as being concurrent with Mad Max it runs something like this…

As we progress through the films the Mad Max series becomes more and more surreal and incorporates more and more mythological and strange elements, culminating in Max passing completely into legend as a demigod hero archetype of the Great Northern Tribe.

The availability of guns and fuel, combined with the strangeness of Brendan McCarthy’s designs probably places Fury Road as a ‘Mad Max 2.5’. Neither a reboot nor a sequel, but rather another story in Max’s legend, told around camp fires in the tribal societies that spring up as the world starts to recover.

Mad Max’s sheer ‘Australianness’ is a bit more muted in Fury Road than it is in previous instalments, though it is still present in accents, outback sensibilities, slang and hints of aboriginal style – especially in the older women that appear later in the film. The strangeness of the heads of the three settlements (Immortan Joe, The People Eater and the Bullet Farmer) further enhances the weird, Dreamtime esque nature of the film, which often seems to be surfing a line between hallucination and car chase.

It is a shame we don’t see more uniquely Australian vehicles, like Holdens (the old types of which are great looking muscle cars) but that’s more than made up for with the customisations which render the vehicles as iconic and mythological as the villains and characters.

In the later Max films, and in this one, you also get a sense of a similar veneration/guilt of the aborigine that one also sees in the relationship of the Americans with their own native tribes, a sense that a degeneration into a tribal culture is a way to survive… and that this isn’t necessarily a bad thing.

Since its inception Mad Max has been invested with environmental and societal concerns about the breakdown of the world and order as a whole. This began with oil wars, spread to water wars and culminated in a limited nuclear exchange. The sense of looming environmental apocalypse remains large in the public consciousness, more than oil wars did in the 70s or nuclear war in the 80s.

This instalment brings that sense to the fore and while the film was 90% practical effects, the CGI that has been used seems to have been used to enhance that sense of a blasted wasteland and the out-of-control weather than threatens it. The storm in particular is almost a character in and of itself, recalling superstorms from certain other forms of doomsaying, prophetic fiction.

The destruction of the outer world is reflected in destruction of the inner world this time around, something previously (largely) unexplored in previous instalments. Many, even most, of the people in Fury Road have some kind of deformity or problem, from the anaemic, albino war boys to the tumour-ridden People Eater and the amputee Furiosa. Max’s inner destruction is mental, and he is strangely ‘absent’ (mentally) from much of the film.

It’s also worth noting that the three warlords are also three old men, people from the time before, a generation responsible for the collapse and living off the bones of the old world.

If something new has been added to the mythology of the series with this ‘episode’ it is bringing in – or replacing – the feral children of before with concerns and themes taken from the war torn areas of Africa. The Warboys are child soldiers, brainwashed and made vicious with indoctrination and promises of an afterlife. The sex slaves (the wives and mothers) recall the fate of those taken by Boko Haram and Immortan Joe, along with the heads of the other settlements, are warlords of the Somali ilk – ruling through fear and force of arms.

Mad Max has always had warlords and bandit leaders, but – while in the background – the shared rule of the three warlords is something new and their uneasy and grudging truce brings a believable, grounded element to an otherwise over the top film. A plausibility.

Immortan Joe, hinted to be a former military officer before the collapse, may actually be the hero of the film, for all his violence, evil, imprisonments and slavery.

Harsh times can require harsh measures. A society is only ever as free and liberal as it can afford to be and in the world of Mad Max, there’s not much to spare. Joe might well have been exactly what was needed – and now he’s dead. (Side note, the same actor played Joe that played Toe-Cutter in the original).

There’s been a big fuss about whether Fury Road is a feminist film or not. This was largely spurred by a blog post on Return of Kings bemoaning it as ‘feminist propaganda’ and a disproportionate reaction to that bemoaning characterising it as a Men’s Rights moan (it isn’t, RoK isn’t part of the Men’s Human Rights Movement and has a lot of nasty things to say about the MHRA as it happens). While RoK occasionally has some thought provoking articles on it, they’re generally thought-provoking in the same that ones on – say – Jezebel are, in that they make you want to put your fist through sheet glass.

The film has also been (secondarily) marketed in many blogs, critical sites and newspapers as being a feminist film.

Much has been made of the Furiosa character, but kick-arse female characters are nothing new and in many ways she’s simply a ‘Miss Male’ (as you might put it). Her femininity is absent from her as a character, while it is simultaneously invested in the wives. The wives are far from strong, soft, feminine, first really seen in virginal robes and ‘frolicking’ in water in a scene played in no small part for its sensuality and from Max’s point of view (a ‘male gaze’, albeit one really more concerned with getting a metal mask off his face than ogling boobs).

The wives are damsels in distress, to the power of a hundred. The other mothers in The Citadel are – literally – brood mares and milking cows. Furiosa, it can be assumed, is infertile otherwise she wouldn’t be driving the rig.

The closest the film gets to feminism are the older women from Furiosa’s original settlement who are a bit ‘Mary Sueish’, combining the aboriginal wisdom tropes and a grab-bag of classical female tropes from old mythology. While they’re set up as agricultural, mother-Earth types in a way we first meet them using the sexuality and nudity of their younger members to bait a trap and we find they’ve resorted to banditry, just like everyone else. They’re just as vicious, just as compromised and even without taking that into account these aren’t feminist tropes – they’re very ancient stereotypes of women as totems of fertility, fecundity, agriculture and peace.

So is it feminist?

It’s plausible, it’s grounded in the real-world fate of women in failed states and it taps into both ancient mythology and new apocalyptic myth (The Road and its human farm springs to mind) and it treats everyone who can fight or contribute as equals.

It’s an egalitarian film if its anything, but only for those in a position to assert their independence. Neither the Warboys nor the Mothers (or wives) have any freedom, because of circumstance and necessity.

Max, on the other hand, is barely human in this, male or female. He’s a force of nature. An animal bent on – as he says at the start – the single goal of survival. This is, strangely, best exemplified off-screen when he disappears to ‘dispose’ of a pursuer, and we never actually see what he does.

90% of the film is practical effects and that’s a huge part of its charm. CGI still can’t compete with practical effects and this, combined with the sheer pace of the film (and, I think, the fact that every shot has been fine tuned by Miller right down to the frame rate) keeps your attention glued to the screen. This is ano mean feat in a world where our attention spans have been eroded by constant stimulation and access to electronics.

This seems, hopefully, to be part of a swelling trend to return to practical effects. The new Star Wars – so we’re told – goes back to old-school practical effects as much as possible and judging from the quality of Fury Road that’s a hopeful trend and something that may help me get back into cinema, to which I have become increasingly jaded of late.

Straightforward filming techniques, practical effects, attention to detail and above all an overriding commitment to the concept without compromise are what stand Fury Road out from the crowd and while little is explicitly explained it dwells in a sweet spot of modern mythologising in away even the New Gods of superhero cinema can’t.