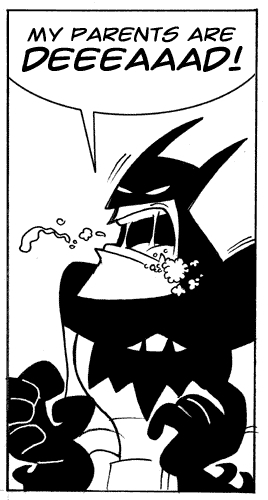 This is a game for two players. Each player describes a superhero in broad, general terms such as ‘I dress up as a bat and punch people, with gadgets’. They then describe three key events from their character’s past.

Each player then takes it, in turn, to present the opposite hero with a heroic dilemma, such as a choice between saving the woman he loves, or a bus-load of nuns.

“I spend many nights praying for a just, benevolent god to bring back my parents, or to reveal who it was that murdered them. My prayers went unanswered. Fuck those nuns. Fuck them in their stupid arses.”

Using the engine of a flashback, that fits a key event, the player must describe something related to it, that informs their decision upon how to act. Play continues until both players have made three dilemma decisions, no key event may be used for a flashback more than once. This ramps up the challenge as play continues.

A compilation of my existing pulp stories in one volume, with the added bonus of an extra story ‘One Man McCann’ – a war story of British pluck and heroism against the evils of Nazi wonder weapons, all on the eve of D-Day!

Cichol’s Children: Genealogy can take one to strange places indeed as is about to be discovered. A ‘mythos’ tale in homage to HP Lovecraft.
Stain: As with hard boiled eggs, hard boiled detectives can go off as well. Stane is a washed up detective who no longer cares, the perfect patsy for a case that nobody wants.
Shanks: An English gentleman walks the dusty trails of the old west, but do not mistake a gentleman for a sissy and don’t think grit is enough to deal with an Englishman when his dander’s up.
The Black Rat: The 1970s, a time a plaid, three day weeks, power outages and only three television channels. Dark times that call for a dark vigilante who sets his sights on police corruption and violence.
The Dastard: Howard’s Conan started out as a thief, The Dastard starts as one and remains as one. A viciously selfish antihero, cast out of paradise and making do in the barbaric world far from his home. One big score might buy him the luxury he seeks.
Wild: The jungles of Africa, the Amazon and Australia still hold mysteries to be discovered, amongst them a strange woman, white as snow, deadly as a panther and a holder of ancient African secrets.
Rink Rash: After the world comes to an end, a sport remains. Rollerbrawl.
Mimsy Burogrove: Expand your consciousness and solve mysteries with the world’s only psychedelic detective.
Doc Osmium: Two-fisted man of science, Doc Osmium teaches physics with pugilism.
Tessa Coyle: In a future world, a fever dream from the 1940s, the Science Police act as a board of ethical oversight – with extreme prejudice.
Ace Slamm: The world of Flash Gordon and Buck Rogers, but through a distorted lens. After interplanetary war Ace tries to find a way to drink himself to death in peace, but the old war keeps coming back to haunt him.You can get the ebook at:

You can also snag a PoD hardcopy HERE.

Not an actual comic but on the principle of ‘fuck you guys’ and ‘make art’ here’s some stuff from the debut of our Marvel game. It’s my universe, my world and will reflect my influences and I may start dicking with the rules a bit as time goes on because my preferences are for the less shiny end of the superhero spectrum (Zenith, Wanted, Planetary, The Authority, The Boys and so on).

This game is a semi-open game I’m running on Google Hangouts at the moment (Sundays, 8pm UK time).

The game opens in late January 2013 and since Dec 21 2012 people with ‘abilities’ have been turning up. A large multinational corporation, the ‘Free Group’ has been trying to run down the people with these abilities to recruit them. The head (figurehead) and founder of the company is a comics obsessive, Sir Wallace Maitland, a sort of combination of Richard Branson, Alan Sugar and Sergey Brin.

The Free Group is a sprawling, international company with heavy investment in IT, mass transit, alternative fuels, green technologies, media, internet, computing and information manipulation and gathering. Maitland is abusing his access to locate people with powers and bring them into the Free Group fold. Maitland, like a lot of billionaires, seems to be worried about his legacy and a leaving the world a better place – now that he has more money than he knows what to do with.

Gathering his first group of ‘subjects’ at the Free Tower in Canada Square, London. At the conclusion of the meeting they emerged to discover that the building had been attacked by a cult in service to a guru called ‘Samsara’. Both Maitland and Samsara seem to have taken inspiration from the 2012 cycle but Samsara resented that the world had not ended and blamed progressives like Maitland for not hastening the end. The ‘heroes’ put paid to the hostage situation without losing any hostages to Samsara and his cult and he is now imprisoned, awaiting trial.

The story of heroes is exploding, but shielded by Maitland’s money and power their identities have been kept quiet – for now. It’s only a matter of time but with the Free Group’s PR department at work they may be off to a good start.

The Honey Badger doesn’t care and neither should you.

Neither hero nor villain The Honey Badger doesn’t give a shit. He just goes after whatever he wants and cuts through whatever is in his way. Many heroes and villains claim to have killed him but in every case he’s just turned out to be having a nap and gets up later on to continue not giving a shit.

If using Honey Badger as a villain, substitute PP for a D6 Doom Dice (or higher).

The difficulty in getting people together regularly and reliably for the Victoriana: War of the Worlds game means that I’ve decided, at least for the moment, to kick it to the curb and to start a Marvel Heroic game. This won’t be the Marvel Universe of course, that’s so crowded it’s hard to create legends or a world of your own. It’s so choked up with heroes and villains that the whole world-creation part that’s a lot of the fun for me isn’t possible.

Characters are going to be amongst the first generation of superheroes known to the world, erupting into power on or around Jan 1st 2013 (I don’t believe in the whole Mayan cycle thing, but it does make a convenient plot-hook).

I’ll be running it on Sunday nights from around 8pm. The great thing about the superhero genre for this is that anyone can just ‘drop in’ and it makes sense for superhero team ups. The MH system is good because it allows balance between the likes of, say, Batman and Superman so that nobody feels useless and the Doom Pool somewhat automatically balances the difficulty for the size of the group and how many dice they throw at you.

My superhero inspiration doesn’t tend, so much, to come from ‘straight’ Marvel and DC. I take my cues from elsewhere. Planetary, The Authority, Zenith, The Boys, Underground and Aberrant. This is going to make for one interesting – and potentially fucked up – game world.

I kind of can’t wait to get started but the only thing that’s not ‘working’ for me as far as MH goes is the very, very linear ‘set fight’ nature of the existing scenarios. At the moment it seems to lack an example of a more complex and interesting, tangled adventure format, which is the kind of thing I much – much – prefer to run.

We’ll see how it goes. I’ll post some of the villains and resources etc I come up with as we go along.

Nik had an overdose of Metacam last night, because my brain is fried from stress and worry. Been up with him all night taking care of him, and more vet expense. We were worried he wasn't peeing, but he has now. Fingers crossed we're out of the woods, but it also seems he might need a second tail amputation. Ada is helping by eating his food and sniffing him.