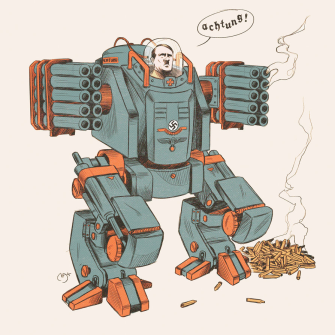 Some evil transcends space, time and even the barriers of reality. Turbo Hitler is but one manifestation from the Liga der Unendlichen Nazis (League of Infinite Nazis) who constantly probe at the barriers between realities from Vampire Himmler’s Transdimensional Fortress Wewelsburg. Many a hapless world has fallen to fleets of saucers bearing the crooked cross, the howling madness of the were-macht or the legions of storm-giant troopers.

Turbo Hitler is but one manifestation of the Infinite Fuhrer, albeit a dangerous one. Resurrected by the elixirs of Herbert West when a dead German corporal was brought to his trench-lab, the undead Hitler spent weeks in No-Man’s Land feasting on the bodies of the fallen until he recovered his senses.

Decapitated in a climactic battle with Iron Joe’s gorilla-soldiers the still-living head was spirited away as the remnants of his Reich fled across the dimensions in Wewelsburg, finally settling in a dead reality to rebuild – and be rebuilt.

There’s an adage in gaming, ‘if you stat it, they will kill it’. So, let’s kill (turbo) Hitler. 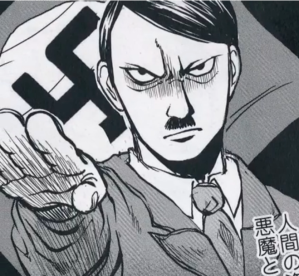 Crush (As standard melee attack, but after leaping onto the target, pins them)

Well that about wraps that up! I hope you’ve enjoyed Starfinder Month here on the blog. If you think you might be interested in seeing me give Starfinder a more full re-working for Machinations of the Space Princess, let me know. Also let me know what other RPGs you think might be worth giving some love to another month! 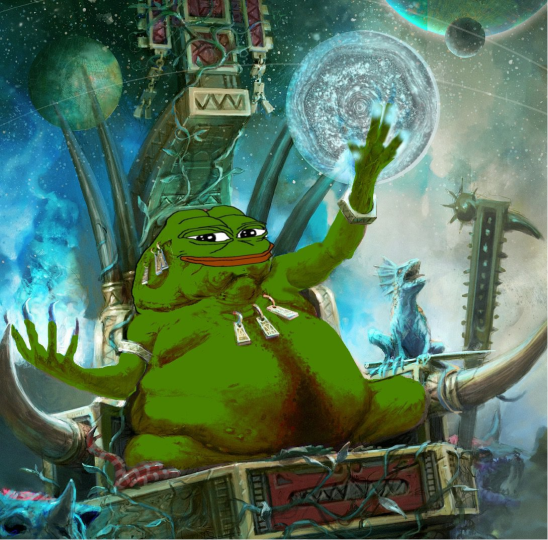 The advent of cheap and readily available communications technology changed society on every world and, for a rareified few who could afford or steal interplanetary communication bandwidth, on that scale too. There were benefits – of course – to the sciences, to the study of magic and to businesses, not to mention the ability of people to organise and make their voice heard easily, but there was also a dark side.

People were mean when they didn’t have to face the consequences of their antisocial behaviour and the more people who were communicating the more opportunity there was for scamming, confidence tricks, intimidation, hacking, spying and laughing at people’s expense.

The collective darkness that gathered in the deepest, nastiest recesses of mass communication gradually took on a spiritual nature suited to the massed minds that fed it. A cold, damp, grotesque being that most envision as some sort of squat, amphibian creature.

Mystics of Keck are most commonly Akashic or Mindbreakers.

While Keck was bubbling up from the shadows, Roffle descended from the light. The positive side of the data networks was everywhere as well, people sharing the joy in their lives, jokes, stories and pictures. This spirit of sharing and happiness manifested in the form of Roffle, a smiling, felinoid being of laughter and good humour – but with no respect for boundaries or legality.

Where Keck is malicious, Roffle is capricious, ever-changing, giving and taking with equal measure but always, always laughing.

Mystics of Roffle tend to be Akashic or Empaths. 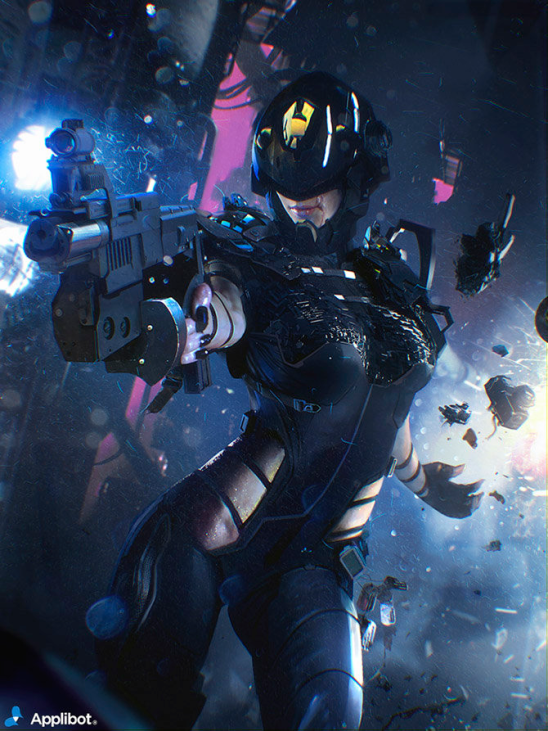 Psibernetic prosthesis use synthetic synapses and hardware to convert energy into raw magic and then to channel it through a number of pre-loaded chips to produce magical effects. There is no truth to the persistent rumours that this technology depends on harvesting nervous tissue from magic-capable androids.

Fitting a psibernetic prosthesis uses your Brain and Spinal Column systems and is made up of two parts.

Part One: The Psibernetic Processor (Brain)

Integrated systems are an armament company based on the frozen moon of Gelida. Colonists there have had to deal with some of the harshest environments in the cosmos, but settled there to explore and to identify the life that exists beneath the icy crust. With every join and module a potential weakness, their environment suits are designed as a single whole with full integrated systems – efficient, but unable to be modified further.

Primarily meant as an aid to climbing and capable of penetrating even Gelida’s super-dense ice, the IS Combat Picks have also become a weapon of choice for some special forces operatives and bounty hunters.

MoshTec makes weapons and gear for those who want something a little different, a little more stylish, a little more individual. Their model, here, is kitted out with four pieces of popular MoshTec gear.

MoshTec Armbursts fit a weapon into your armour, leaving your hand free for other things (even holding an additional gun!). Basic sensors and motorised compensators help your aim stay true, despite the awkward placing of the gun! The devil makes work for idle hands, MoshTec makes guns for busy hands!

The MoshTec VariMass uses patented technology to decrease and increase the mass of your weapon depending on whether you are striking or using it. On a violent stroke it rapidly increases in mass, smashing through armour, cartilage and bone while, at rest, it is as light as a feather!

MoshTec’s advanced bio-synthetic technology now allows you to graft the organs and other appendages of alien species to your own – even if you have incompatible biology or DNA! Simply buy the grafting gel (1500), find a qualified medic, locate a donor and cut and paste! Lagomorph ears here were donated and grafted to our human model, fitting her System: Ears and providing her with a +2 Racial Bonus to Perception rolls that involve hearing!

You spent all that money on fine clothes or high-tech tattoos, only to hide it all beneath heavy armour plating. What’s the point? MoshTec’s Showskin armour combines light, agile armour plating with a tensile, planar forcefield to provide you with constant protection, while still letting you show off your duds.

The galoboar is an enormous beast, much prized as prey for hunters on safari. The galoboar is a tough foe, covered in thick rubbery skin and bristly hairs which absorb impacts and burn off, absorbing energy fire. The galoboar’s tusks are valued for inlays and carving, its flesh for meat and its – prodigious – stink glands in the production of perfume. Only sanctioned hunting is currently permitted in order to maintain the galoboar’s numbers.

The Snark Turbiner is a great vehicle for people on a budget. Designed as a simple to use transport and gunnery platform for hunters and safari tourists, it’s a relatively tough, no-nonsense machine that can put up with a good deal of abuse. It is, however, rather noisy and its heavy duty cargo arms cause a great deal of drag. 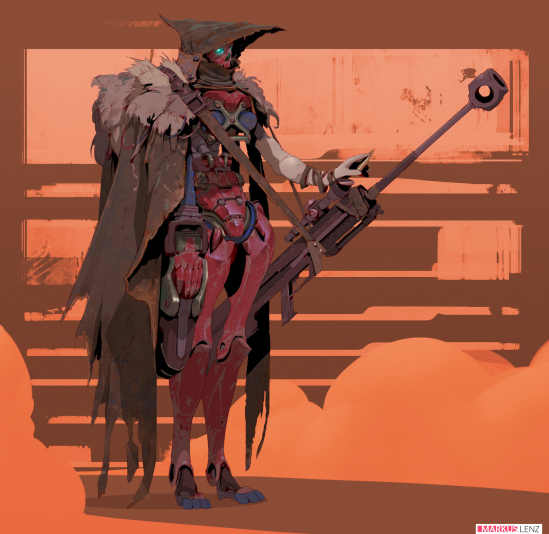 Art by B S

A very rough first pass of some ideas.

A Necrotech is a specialised version of the technomancer whose remit is ‘dead’ machines. Artificial intelligences and androids have a soul of the more conventional kind, but the necrotech has extended from this – through study – into the ‘machine spirits’ of lesser computers and machinery. They can recover lost data, bring broken machines back to life and weave fragments of corrupted programs into new applications.

Spells
You cast spells from the necrotech spell list, as a technomancer.

Magic Hacks
2nd Level: Weaponised Bug (Su): In place of Empowered Weapon you turn your weapon incorporial and can strike at incorporeal or undead enemies with a bonus to attack equal to the spell slot you use to enhance your weapon, in addition the weapon does 2d6 extra damage and can strike incorporeal targets.

5th Level: Necrobattery (Su): In place of Charging Jolt (Su) as a move action you can drain the life or electrical energy from a target to which you struck the death blow in the previous turn. You can recharge a weapon with a number of charges (or ammunition) from this occult energy, equal to the CR of the slain creature (minimum 1).

8th Level: Glitch (Su): In place of Mental Mark you can glitch an enemy who fails a Will save against one of your spells. They take a -2 penalty to attack and skill rolls for one round

14th Level: Dead Circuits (Su): In place of Spell Library you can carry around a severed robot head or motherboard and draw knowledge directly from its circuits. This provides you with a single skill, proficiency, special ability or feat from the creature you slew and decapitated (or removed the motherboard from).

0 Level
Dancing Lights
Daze
Detect Affliction
Detect Magic
*Scattershot: You can hurl a handful of scrap at an enemy doing damage as per Energy Ray, but as slashing, piercing or bludgeoning damage – your choice.
Ghost Sound
*Break: Touch an object or construct to do 1d4 hit points to it – this can be done in addition to melee attacks.
Psychokinetic Hand
*Drive Dump: This works as per Grave Words, but for broken computers, robots, machines (and androids).
Token Spell
Death Charge: By touching a destroyed entity or machine you can transfer one charge of latent energy from it into something else that you have that requires charges.

1st Level
Comprehend Languages
*Detect Data: As Detect Radiation, but it detects programs and data-caches, even if not currently operational, within 120 ft. You can even read this information – provided its not protected or locked down.
Detect Tech.
Erase
Flight
Grease
Hold Portal
Holographic Image
Identify
Jolting Surge
*Charm Construct: Make one (technological) construct creature believe that it is your ally.
*Command Machine: One robotic or technological device or creature obeys your command for 1 round.
*Confuse Construct: One robotic or technological device or enemy is confused for one round.
Magic Missile
Overheat
Supercharge Weapon
Unseen Servant

6th Level
Battle Junkbot
Chain Surge
*Flesh to Machine: Transmute a living creature into a robot
Control Machine: Technological constructs follow your commands and don’t attack you (as per control undead)
Greater Discharge
Disintegrate
Ethereal Jaunt
Flight
Holographic Image
*Psychic Technician: Cure all statistical damage and afflictions from a machine or robot.
*Incorporate: This slot is permanently used up, fusing a single weapon up to longarm size within your body. This weapon is now biotechnological and can be recharged or reloaded with eight hours of rest or the sacrifice of one hit point per charge/shot.
Planar Barrier
Planar Binding
Plane Shift
Greater Resistant Armour
Mass Rewire Flesh
Shadow Walk
Wreck Fleet: As per shadowy fleet, but made up of very real space junk
Sympathetic Vibration
*Blow Circuits: Instantly kill or massively damage one machine or technological construct per caster level, depending on target’s CR.
True Seeing
*Rust Plague: School Necromancy, Targets one technological construct or device, Duration instantaneous, Saving Throw Fortitude negates, harmless. Spell Resistance yes, harmless. See below. The Rust Plague can be spread, the save at -4 from the DC of your casting.
Wall of Steel

Despite the name, this magical, corroding plague can affect technological devices and synthetic constructs no matter what they are made of. 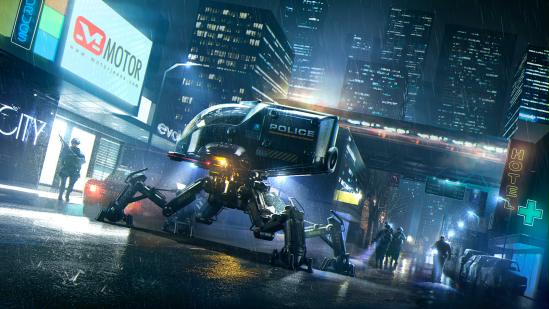 PLOD are lumbering, but intimidating, police droids which can be deployed by truck – typically in pairs. They are most commonly used for riot suppression, guard duty and for establishing perimeters around ongoing criminal situations (such as hostage negotiations). The PLOD personality is dour and matter-of-fact and has a tendency to use technical and long-winded language. All PLOD are fitted with a crime-analysis computer that uses complex profile algorithms to determine potential troublemakers by alignment. Despite constant revisions, there are continual claims and protests that the PLOD system has racial bias.

Fierce little creatures with disarmingly cute features, the lagomorph are one of the smallest of the intelligent races, barely scraping past two feet in height and covered in soft, downy fur. Their long ears are distinctive and their armour and clothing is often modified to include their ears or to have holes through which they can stick. The lagomorphs are constantly and consistently underestimated and often overcompensate for their cute appearance with foul language, smoking heavy cigars and dying aggressive patterns into their fur.

Size and Type: Lagomorphs are small humanoids (barely) with the lagomorph subtype.