The art pieces by artist Michael Manning that were created for Tales of Gor and World of Gor.

Accomplished and talented fetish Artist, Michael Manning, brings the Counter-Earth to life in these illustrations for the RPG and world guide to John Norman’s Gor. Here you can see the illustrations in their full-size glory and appreciate their detail and style.

Buy it HERE in PDF.

The hardcopy version is a Lulu EXCLUSIVE and will not be available on Amazon or other outlets.

You can grab yours here, or via your localised Lulu store.

PROJECT is a role-playing game about heroic guardians of reality. After a terrible, supernatural disaster the world has been rent asunder and strange things have begun to bleed in all around the edges. Humanity has recovered to an extent and continues to fight these beings and forces from beyond known as ‘Entities’.

The group PROJECT is at the forefront of humanity’s defence, using the strange technologies and abilities of the Entities against them and reasserting reality one bloody fight at a time. In the game you will take the role of one of the heroic agents of PROJECT, modified through barely understood technology and thrown against the strange and deadly beings and events that press in on the Earth from its neighbouring dimensions and parallels.

In the process you may begin to discover things that you wish you didn’t know and that the battle for reality is not as black and white as you have been indoctrinated to think.

A compilation of my existing pulp stories in one volume, with the added bonus of an extra story ‘One Man McCann’ – a war story of British pluck and heroism against the evils of Nazi wonder weapons, all on the eve of D-Day!

Cichol’s Children: Genealogy can take one to strange places indeed as is about to be discovered. A ‘mythos’ tale in homage to HP Lovecraft.
Stain: As with hard boiled eggs, hard boiled detectives can go off as well. Stane is a washed up detective who no longer cares, the perfect patsy for a case that nobody wants.
Shanks: An English gentleman walks the dusty trails of the old west, but do not mistake a gentleman for a sissy and don’t think grit is enough to deal with an Englishman when his dander’s up.
The Black Rat: The 1970s, a time a plaid, three day weeks, power outages and only three television channels. Dark times that call for a dark vigilante who sets his sights on police corruption and violence.
The Dastard: Howard’s Conan started out as a thief, The Dastard starts as one and remains as one. A viciously selfish antihero, cast out of paradise and making do in the barbaric world far from his home. One big score might buy him the luxury he seeks.
Wild: The jungles of Africa, the Amazon and Australia still hold mysteries to be discovered, amongst them a strange woman, white as snow, deadly as a panther and a holder of ancient African secrets.
Rink Rash: After the world comes to an end, a sport remains. Rollerbrawl.
Mimsy Burogrove: Expand your consciousness and solve mysteries with the world’s only psychedelic detective.
Doc Osmium: Two-fisted man of science, Doc Osmium teaches physics with pugilism.
Tessa Coyle: In a future world, a fever dream from the 1940s, the Science Police act as a board of ethical oversight – with extreme prejudice.
Ace Slamm: The world of Flash Gordon and Buck Rogers, but through a distorted lens. After interplanetary war Ace tries to find a way to drink himself to death in peace, but the old war keeps coming back to haunt him.You can get the ebook at:

You can also snag a PoD hardcopy HERE. 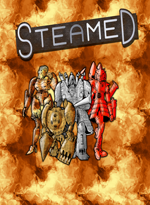 You can now purchase Cthentacle Deluxe – a hardcopy of the game and EVERY supplement for it at Gamecrafter.

I’m afraid the shipping is prohibitively expensive for non US people, so I wouldn’t recommend you buying from there unless you can club together and buy lots of copies or want to work something out with me.

I almost had a deal worked out with another group for getting it printed in Europe, but I’m afraid that’s fallen through for now.

If anyone has any leads on European-based POD board game companies, please let me know.

I’M NOT MESSING WITH YOU, I MEAN IT

Every gloriously horrible illustration from the entire Cthentacle game line present and correct for ogling and examining without any of that irritating game information getting in the way.

Or in full colour hardcopy HERE

Here’s a couple of photos so you can see the size of the books and get some idea what you’d be getting if you bought the hardcopy of the books.