If you like horror games and scenarios, now’s the time to pick them up. Drivethrurpg has a sale on and I make a lot of horror and horro-adjacent material so you should find something you like.

Of course you SHOULD be buying over at Post-Mort.com, but there’s no sale there, so I’ll forgive you just this once…

There’s a bunch of stuff on sale, in addition to the stock art sale we’re currently running.

Horror games and scenarios? We’ve got you covered.

Spooky stock art for Halloween themed hand-outs or products of your own? Yep.

You can buy this piece of stock art, for as little as $1 this month as part of a promotion. We have a promotion running all month, 31 pieces of monstrous stock art, one a day until all are at on sale culminating on the 31st for Halloween.

This piece depicts a troll, bursting from the earth, perhaps in a fantasy Western setting.

The desert troll is a seasonal creature, living far from the traditionally trollish homes of swamps and marshes, and adapted for that environment. The desert troll emerges and feasts when the rains come to the desert, storing moisture and fat in its capacious belly and wart-like growths, as well as the thick mucous that covers their flesh. As the rains come to an end they find a patch of earth and bury themselves in a crust of mucous to await the next rainy season. On occasion, alerted by the patter of hooves or the rumbling of wagon wheels, they will opportunistically burst forth from their hibernation in a feeding frenzy, to supplement their stores until the rain comes again.

To read the rest of this entry, with statistics for 5e D&D, please subscribe to me on Patreon for as little as $1 a month. 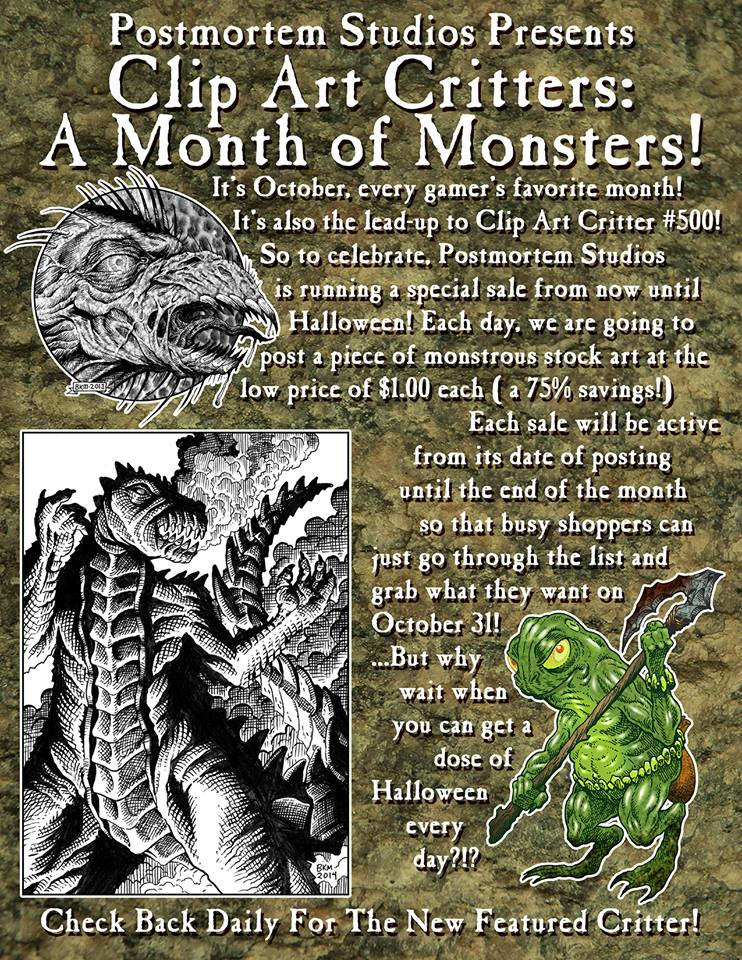 A MONTH OF MONSTERS!

To celebrate, Postmortem Studios and Brad McDevitt are running a special sale from now until Halloween. Each day we’re going to post up a piece of monstrous stock-art at the low price of $1 (a 75% saving!)

Each sale will be active from its day of posting until the end of the month, so that busy shoppers can just go through the list and grab everything that they want on October 31st!

But why wait when you can get a dose of Halloween, every day!

Check back daily for the new featured critter!

We live in ‘interesting times’, as they say. There’s a confluence of all kinds of factors along lines of race, gender and politics that haven’t been as important or as visible as they are now since the 1980s. Racism – in all directions – rears its ugly head in part because of increasing poverty, in part because people seem to want things to be bad so that they have something meaningful to fight. Relativism and postmodern thinking appears to hold sway in much academic discourse, even redefining the very meanings of terms like ‘racism’ and ‘sexism’ to excuse the hypocrisy of many who prosecute those agendas.

Horror is often a good place to explore ‘what ifs’ and to challenge dominant paradigms.

What if every idiotic, paranoid fantasy the xenophobic right ever had about immigrants were embodied in one terrifying instance.

This adventure for Blood! is a sort of urban ‘Green Inferno’ or ‘Cannibal Holocaust’ meets ‘The Raid’. Don’t let on to your players however…

This adventure gives you a ‘playground’ for an adventure and a cast of characters. How you play with it is, however, your own decision. A recommended path is also provided to describe how an adventure might be run, but in the end it’s up to you.

This is a work of fiction. A horror scenario. It contains material of questionable morals and horrible nastiness. Don’t assume writing this is an endorsement of any such views. Like all good horror it’s about playing on and subverting people’s fears and expectations.

‘Rough as Toast’ is my imprint for ‘cheap and nasty’ products. Things that are a bit more experimental, silly or “hit and miss” where a lot of money can’t be spent or risked on a bit of an ‘out there’ idea. If you see that marker, you know you’re getting something a little ‘wacky’ or uncertain, but you will probably get some fun out of it.

The Pulps were churned out at a massive rate of knots. Strange and silly ideas thrown at the wall to see what stuck. Occasionally some of those ideas turned out to have legs – legs that are still carrying them nearly a hundred years later. My intent with Schlocktoberfest (previously just a sale some years back) is to just throw a bunch of monsters, ideas and other bits and pieces at the ‘wall’ and see what sticks. Maybe something will.