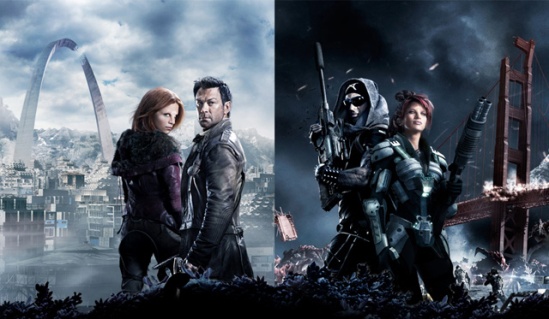 This is going to be an ‘holistic’ review, in that I’m reviewing Defiance as a whole; the TV series (of which I have seen the opening episode) and the computer game – which I have played to death.

Transmedia was a huge buzzword around the time that The Matrix got into full swing and The Matrix remains an exemplar of the idea of Transmedia. The Matrix had the films, comic books, animation, computer games, all of which wove together to create a whole ‘Matrix experience’ which – in theory – was superior to consuming any of the media individually.

There are problems with this approach and The Matrix fell afoul of several of them. You want to encourage people to consume all the media that your creation appears in, but you also want to make sure that each product can be consumed by itself and understood. You want to give the ‘true fans’ a frisson of excitement when they recognise something from the comic/film/animation/game in one of the other media, but you don’t want to create a cadre of arrogant know-it-alls.

The buzzword fell away somewhat but transmedia is now everywhere. Its getting to the point where it’s hard to buy a toy that doesn’t have some website connection or a property that hasn’t been merchandised to death. Ephemeral communities spring up around everything as companies attempt to provide extra value and keep their customers on board and engaged when so much else exists to grab their attention.

Enter Defiance, a TV Series and an MMORPG, one that’s bound to end up in other media as well. I’d expect there to be board games or RPGs in the works and if the series and the game succeed then there’ll likely be more.

Defiance isn’t really anything new, rather its a hodge-podge of existing science-fiction tropes and concepts all muddled together. Its unclear at this point whether the TV series will work as the start was a little shaky, it does have potential though. Star Trek TNG had a very shaky start, Eureka often wasn’t ‘stellar’ in the beginning but found its feet through humour, charm and great performances by Colin Ferguson and the rest of the cast. Defiance may never reach the heights of TNG but it definitely has the potential to match Eureka, Warehouse 13 or Andromeda’s better days.

The innovative stroke in Defiance is bringing the universe to Earth rather than taking Earth to the universe. Instead of a crew aboard a starship you have the people of a town. I’m sure part of this is practical – re-using the same sets and locations is cheaper – but it also allows for a more interesting a deep character and community dynamic to evolve over time. It also means you can use Earth and yet add alien elements, technology, biology and have it all make a kind of sense.

The basic plot is this. A group of alien races came to Earth in Ark Ships, a voyage at sub-light lasting thousands of years. They arrived to find Earth occupied by another intelligent race but, desperate, they began to colonise and terraform anyway. Earth and the fleet went to war, a ruinous war that eventually culminated in both sides refusing to fight and an armistice being declared. The fleet was largely destroyed and now forms a ‘ruin ring’ in orbit around the Earth, chunks of which fall from the sky on a regular basis bringing artefacts, technology, life forms and terraforming technology to the surface. These materials are hunted for by ‘Arkhunters’ who are really a ragged mix of adventurers, raiders and fortune hunters.

Various settlements exist – including the town of Defiance in the ruins of St Louis – and border farms trying to resettle and eke out a living from the changed wasteland. Its a setting rich in possibilities and with a great deal of scope to tell a lot of different stories.

The series’ opening episode set the scene and had a few stand out characters (mostly the doctor) but was relatively disappointing when compared to the game. It was a very standard plot and with the invasion of the cyber-zombie Volge and the massive explosion the plot felt hurried and the story felt more like the cliffhanger end of a series rather than the beginning.

The game, however, is brilliant and the experience of playing the game definitely brought some extra value to watching the series. Like the series the game is a hodge-podge of ideas taken from other games. There are elements of Fallout, elements of Trion’s other game RIFT and a great deal of stuff copied almost exactly from Borderlands which isn’t such a bad way to go all things considered.

The storyline of the game and the frantic action gives hope for the series since the two are supposed to be somewhat integrated (quite how since the game is set in the ruins of ‘Frisco and the show is in St Louis I don’t know). Names from the game showed up in the opening episode though, so we’ll have to wait and see.

I enjoy the open-ended nature of the game, the free-roaming and the fact that you can play any ‘level’ character in just about any area of the map and still have a good and sometimes challenging time. Hooning about the landscape racing from Arkfall to Arkfall is also fun and while character/weapon optimisation is there its not so absolutely key that you can’t make roleplaying decisions and get away with them. In something like WoW you wouldn’t be able to do the same and remain and effective player.

This is helped by the fact that the game is a third-person shooter. This means your skill and knowledge as a player can compensate or outrank any optimisation that you feel you might have to do. Characters are customisable in appearance, dress, weapon loadout and weapon customisation as well as access to a high tech interface called an ‘EGO’ that gives you access to superhuman abilities such as invisibility camouflage, situational damage bonuses and so on.

The storyline in the game so far has you working for a weapons manufacturer, now running a great many superior Arkhunters in the search for game-changing technology. An Ark Core is the object of your quest north and south of the Golden Gate bridge but even after doing that there are random events and Arkfalls to keep you busy as well as cooperative and competitive instances.

I’m playing on the PS3 and while I thought I would miss having a keyboard to communicate it has actually been a boon. Most people in MMORPGs are fucking arseholes and not having to endure endless shouts of ‘N00b’ and OOC chat definitely enabled me to concentrate more on the game and playing my character. Team-ups at objectives tend to come together seamlessly and without being able to communicate people seem to be more inclined to be nice to each other.

The game does have bugs, a couple of bugged missions, frequent connection dropping and some interface annoyances, but overall it’s great.

The game gives me hope for the TV show, which is, perhaps, a little backwards.

If you’d care to hook up on the PS3 my PS3 nick is GRIMACHU and my character is James Grimm.