Or: An Egregious Example of the Tone Deaf, Silencing, ‘Humour’ of the Heteropatriarchal, White, Oppressor Class 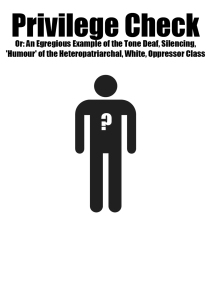 Not oppressed in the actual meaning of being oppressed, but rather how many minority groups demographics you can cram yourself into. If you’re the most oppressed, nobody can hope to challenge anything you say or think without being a horrible bigot.

Buy hardcopy HERE (it may not be up yet, give it a week or two)