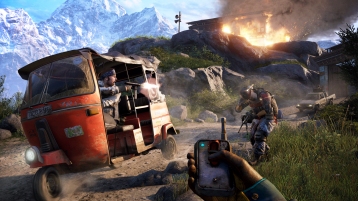 Far Cry 4 is the latest instalment in the series and it is pretty much more of the same. It’s the first Far Cry for the new generation of consoles, though you might not necessarily feel aware of that as you’re playing. This instalment takes us to a fictional pseudo-Himalayan nation (Kyrat) under the rule of tyrannical crime-against-fashion Pagan Min where you, as lost scion of a previous rebel leader end up entangled in the Kyratian Civil War, becoming the key player who determines how things are going to work out – despite only really being there to scatter your mother’s ashes.

While Kyrat is a beautiful recreation of a mountainous country with many gorgeous locations it doesn’t make a great deal of internal sense, with the various locations seemingly plonked down willy-nilly here and there and the geography (and the way in which you have to travel across it) rather arbitrary and often a bit frustrating.

Character design is good and the characters move and express themselves well, especially the main characters whose movements and mannerisms are convincing.

The weapons are the usual sort of spread, though they lack any truly iconic or truly outstanding weapons that stand out above the rest. In many ways this is good as it requires you to switch around to use the right tool for the right job but it also means there isn’t really a particular weapon you can aspire to. Even the signature weapons aren’t that much better than anything else you can use, so other than OCD completism there’s little reason to gather every weapon.

Unfortunately, Far Cry 4 feels a bit like it’s ‘painting by numbers’ at this point, formulaic, repeating the same ideas found in the previous games without any innovation or expansion. It’s the same thing, just in a different location. It also doesn’t feel like it lives up to the new platform at all, with little to no discernible difference at the play experience level between the graphics and sound of Far Cry 3 on the PS3 and Far Cry 4 on the PS4.

None of this is to say that it isn’t beautiful and impressive, just that expectation is higher now and we’re still, really, waiting for games that really stretch the legs of the new hardware and show what it is capable of.

Gameplay is largely standard FPS controls. It does this well without a lot of the clumsiness many console games have compared to mouse-and-keyboard FPS on the PC. PC still gives a superior experience but as an old PC warhorse I find that – more and more – the console FPS experience is becoming tolerable and playable – at least against NPCs.

Other than the usual run-and-gun elements of FPS stealth is an important part of the game, especially when rescuing captives or capturing outposts.

The set-pieces, karma missions (how you win the hearts and minds of your fellow rebels) and the tower and outpost capture missions are exciting, if repetitive, but there’s also a lot of filler with little or no pay-off. Meaningless collection missions for letters, records and demonic masks with nothing to really show for it at the end – disappointing given the amount of effort it takes to unlock all of the map and get them all.

As you undertake missions you unlock the map and advance the story, giving you your path through the open world, but letting you go off the beaten path as much as you want. That may, actually, be a problem with a lot of these games as being able to spend hours going off and doing your own thing without the story or threat advancing robs you of any real sense of urgency or threat to the baddies. Games weren’t always this way, going back to some of the earliest free-roaming 3D games such as Midwinter and Midwinter 2, if you spent too long faffing around the enemy would advance and overrun you – a model that might be welcome in these sorts of games in the future.

Ostensibly your kukri-wielding maniac – Kyratian in race but American in culture – is in Kyrat to scatter his mother’s ashes but can’t as the country’s civil war has divided the country and made it hazardous and near-impossible to get to where you need to go. As a descendant of the former rebels you’re also considered a useful PR tool and – increasingly – as a warrior. Your favour is curried by the two competing rebel leaders (one a traditionalist religious fanatic, the other a reformer who’s willing to do unspeakable things to bring her country into the future). The existing dictator, Pagan Min, is also obsessed with you to his detriment since it seems to prevent him finishing you off.

The story and motivations never reach the interest level of Far Cry 3 which was far more engaging and had a much more powerful hook for your character. The choices you are presented with lack urgency and are about as equally hopeless. They also lack any real emotional payoff for you. Even the final scene of the game is anticlimactic. This may be a deliberate design choice, trying to make some sort of comment about the pointlessness of civil wars or the cyclic nature of conflict (tying into the buddhist themes) but if so it’s a bad choice since it robs the player of any real sense of accomplishment from finishing the game.

The one place in which the story – and the design – truly shine are in the hallucinatory mythic sequences, to the point where these might have made for a better game than the one we got. Belled tigers, magic bows, demons and giant birds are just more engaging than gunning people down with a rattling AK.

Having been involved wit Gamergate until very recently (I still support but am phasing out my activity for various reasons) I was disappointed in many of the horrible statements made by people involved in the making of this game. I was also concerned, given some of the statements from the designers, that it would be a tokenistic, overtly PC love fest. Especially since one of the rebel leaders, Amita, is allegedly based on Anita Sarkeesian – something that made repeatedly blowing her up and shooting her incredibly cathartic, despite it being a fail condition for much of the game.

Those fears were unjustified though. There’s – thankfully – plenty of things in the game that are still ‘problematic’, and, therefore, fun.

Far Cry 4 is a perfectly respectable game and plenty of fun to play, but it fails in its storytelling in a way Far Cry 3 did not, ironically – apparently – as a response to Far Cry 3’s perceived lacks which turned out to be comparative strengths.

Far Cry 4 doesn’t really try to tell a strong story and many of its actions are robbed of significance, meaning or payoff because it has tried so hard to decouple its exploration and side activities and to focus more on being a murder-sandbox. Unfortunately, for someone like me who likes story and likes to get caught up in making a difference to the virtual world this made the experience lacklustre and unsatisfying.

Still, playing at Gurkha is pretty satisfying, in the moment.