The Relentless are an unstoppable force. They single out targets that have caused enormous disruption to the status quo – for good or ill – and attempt to kill them. The problem is that the moment one of The Relentless is killed, another takes its place and begins to track its target. So it goes until they, mysteriously, decide to cease their pursuit or until their target goes so deep into hiding that they cannot be found, even by these dogged pursuers.

I’m a fan of the Alien series – by which I primarily mean Alien and Aliens. The rest of the films can take a running jump off a cliff so far as I’m concerned. None of them live up to the promise of those first two. Some of the Dark Horse comics on the other hand, were brilliant and if Aliens Versus Predator had been based on their comic it would have been amazing. Prometheus looked pretty, but was a conceptual nightmare, like someone had given Von Daniken the brown acid and an unlimited budget.

I love the franchise, but I’m a picky motherfucker, is basically what I’m saying.

You step into the shoes of Amanda Ripley, Ellen’s canonical daughter who had died by the time we get to Aliens. Amanda has grown up without her mother and without knowing what happened to her. When the Nostromo’s black box is discovered and word gets back to Weyland-Yutani, she goes out on the company vessel the Torrens alongside an oligatory synthetic (Samuels) and a company woman (Taylor) to the remote station Sevastopol, owned by the lesser rival corporation, Seegson.

Upon arrival it becomes obvious that things have gone horribly wrong with Sevastopol. Nobody appears to be in charge, there’s no communications and to get to the station involves a spacewalk that goes wrong and leaves the trio scattered across the station.

As Ellen you have to survive the panicked populace, the rogue synthetics (lower tech than WT ones), the smashed up and breaking down station and… the alien.

Though things continue to get worse and it turns out it’s not just the one alien, but a whole nest (though the canonicity of aliens becoming queens or reproducing without queens – at least to start with – seems to be in question).

Eventually you escape – though that’s a questionable interpretation of events – and space is left for a sequel, though I think the story works better as a stand-alone.

In many respects the presentation of this game is perfect. It’s a retro-future very much in the style of the films Alien (1979) and Aliens (1986). This is played out in effects like green screen monitors, flickering strip lights, bulky monitors and computers that look more like Apple IIs or terminals. The save icon is even a video cassette.

This might be confusing and strange to younger gamers, but it definitely puts you in the world of the two best films and the whole design approach echoes aspects of those films (primarily Alien) and maintains the style throughout the game. The only drawback to this consistency is that many of the levels blur together through similarity and it can be hard to get a sense of being on a ship rather than the station.

Alien infested sections definitely have their own feel, as does the space jockey wreck, the planet surface and the exterior of the station, so it’s definitely not for lack of talent that other aspects feel a bit samey.

The sound score, similarly, echoes the films very faithfully and cranks up the tension of Goldsmith’s original score (Alien) to create terror by association. The only problem with it is that sometimes it cranks up the tension for no readily discernible reason, the musical equivalent of a cheap jump-scare.

The one area that really, really, really lets the game down in its presentation (beyond the minor gripes that there’s a lot of walking around doing nothing, which builds tension but gets old) is the alien.

You would really, really hope that the alien would be well done. Graphically it looks fine, but the motion capture animation for the alien is just too human looking. When it’s stalking you, you can’t help but be disappointed as it wanders around like a child who’s made stilts out of a couple of treacle tins. It only really becomes scary when it’s in pursuit of you and since it’s so key to the story and much of the play, it really lets the game down.

This is an area in which games can be better than films and better than the source material. Having the alien clamber on walls and ceiling as well as the floor, having it move in a less human manner would have massively improved the game. As it stands the blank-faced androids are scarier than the alien, and that’s just wrong.

The game plays like an FPS, though it’s really more of a stealth/survival game. Frustratingly you can’t jump, though you can crouch, crawl and hide under tables and inside ducts. The lack of a jump/scramble – save in particular spots – is hugely frustrating, especially whe being unable to hop up a couple of feet out of a gutter can be a matter of life and death.

Combat isn’t a huge focus, though you will find yourself struggling with other survivors and androids – but not aliens, which you can’t kill or hurt. You’re not a warrior, so you’ll find yourself lining up shots carefully and still missing. You’ll also find yourself bashing in people’s brains with a wrench a lot.

Androids are tough and if you get into a wrench-fight with one they’ll often catch your swing and end up throwing you back or into a wall. This does definitely bring home the strength and toughness of even the inferior Seegson androids, but it’s really, really repetitive and could have done with a bit more variety, or being a little less flawless at catching and deflecting your attacks.

Score
Style: 4.5 (only really let down by the alien).
Substance: 3 (A lot of plot information is hidden away on terminals, a lot of time in the game is lost crawling down corridors, stretching play out to snapping point).
Overall: 3.75

The way people had been going on about this game I’d expected it to cause spontaneous orgasms and to spew kittens out of the screen. Even so, I wasn’t that sure that I’d like it and only got it because it was at reduced cost in the PS4 store. If I’d paid full price, I think I’d have been a little disappointed.

It’s not that this isn’t a good game, it just doesn’t really live up to the hype around it. I think, perhaps, given that Colonial Marines was such a disappointment to everyone, people were hugely pleased to get this game and for it not to suck.

A full career path for the Traveller OGL
Many people are fascinated by alien cultures but for some it becomes an obsession and for a few, exceptional people they become a part of the culture that fascinates them. Accepted in a way that most never could be.

Caught between their own people and their obsession, the Alienist is a bridge between disparate cultures separated by light years, psychology and even biology.

Xenophiles are those who are truly in love with the alien and wish to become a part of it. They might be scouts or soldiers who have ‘gone native’ while stationed in alien dominated space or they may simply have become enchanted with the aliens through the image that they have in the media, seeing them as the embodiment of a concept or as something in their own species that has been lost or diminished. In extreme cases a Xenophile may be suffering from a mental illness, believing that they truly are a member of this alien culture that has become trapped in a human body. They seek to soothe their craving for belonging by finding a new home in an alien culture.

Xenoethnologists are scientists who specifically study the cultures of alien species. Rather than the dry, biological facts or a broad study of intelligent beings as a whole, they zero in on an alien culture and study it intensively, living amongst it and learning to translate meaning between that species and their own. The build bridges between different species and cultures that sometimes don’t even share base biology or senses, let alone concepts.

Tourists Tourists are fascinated by alien cultures in a more general sense. They want to experience as many of these cultures and viewpoints as they can, to travel far and wide seeking novel experiences and seeing strange wonders. They wander from port to port, trying to get off the beaten track, away from the well travelled and to lose themselves on alien worlds. Tourists often find themselves in trouble but this adds a frisson of excitement to their travels and and gives those who return to civilisation interesting stories to tell.

Grotesque creatures rejected by an old and cultured world, the dictators pushed and clawed their way to planetary dominion. Relentless in their demands they turn friend against friend to do their bidding. Recently they have begun to tire of toying with the weak races at home and seek to control the entire universe.

Dictators have the following traits:

An ancient, geriatric and inbred race the Dictators ‘Saahim’ in their own language, which means ‘Masters’, are an offshoot of a long departed elder race, the ‘bad part’ that they left behind. Cruel, vindictive, genetically megalomaniacal and sadistic, they are riddled with deformities and congenital problems due to their tiny gene pool, kept alive only through cybernetic implants and hatred of anything ‘other’. Powerfully psychic they dominate and control their thralls through fear, intimidation, technology and direct psychic control. 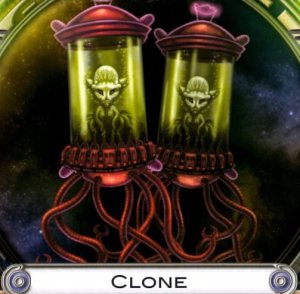 A prolific species on a slowly cooling globe, the Clones traditionally selected the best of their race to represent them in territorial struggles. As the gene-pool thinned, one clan developed techniques to artificially duplicate their champion before battle. Thus, always rejuvenated, they came to dominate their world during the geologic crisis and emerged from it anxious to carry their new knowledge into cosmic competition.

Clones have the following traits:

Clones have become an almost entirely engineered species and can no longer reproduce normally. Variations are introduced while they are being cloned and main bloodlines control almost everything. New bloodlines must overcome prejudice and prove themselves before being accepted. Clones treat their bloodline almost like an extended family, mirroring the race’s tribal and fractious past.