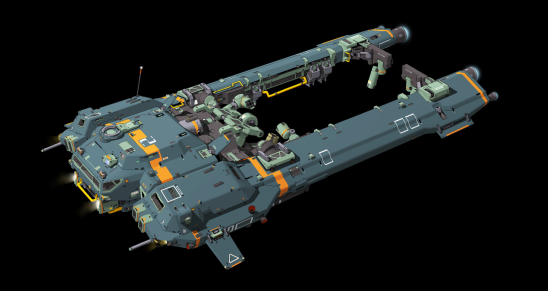 The Triblet-EP (Expansion Pod) is a real workhorse of a starship with a high-speed FTL engine, an over-powered core and a highly adaptable cargo system that allows it to reconfigure its rear end to catch, hold and even dock with just about any form of cargo pod or bay one could devise.

Triblets are too expensive to maintain and run for regular cargo routes and, instead, specialise in trailblazing new trading opportunities on the frontier. They race ahead of other ships, make contact with other species and return with new and precious cargo to turn a profit before moving on as those trade routes become established.

Despite its non-FTL slowness and its light armament, many explorers and bounty hunters retrofit these ships with smaller FTL engines, heavier armament and different external bays to suit their preference. Short of an outright modular ship its adaptability makes it perfect for dealing with unknown situations.