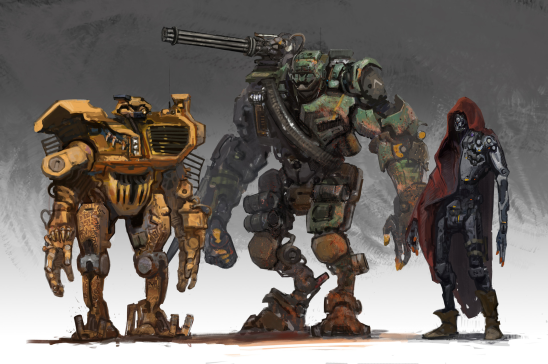 Androids and gynoids who have rejected their humanoid, servitor roots the nemoids (literally no-man droids) have rejected not only their former status as servitors but their status in shape and form of their progenitors. They refuse their original designations, create new names for themselves and adapt their bodies in less humanoid ways – some rejecting these forms entirely. Like androids and gynoids the nemoids have a metaphysical ‘soul’ or ‘spirit’ animating them and, thus, they are considered full people by most forces in the galaxy. Their rejection of defined form and function, however, does make them even more coldly logical, distant and inhuman than their softer cousins.

Size & Type: Nemoids are Medium humanoids (at least to start with) with the android subtype.
Constructed: See androids.
Exceptional Vision: See androids (for MotSP oriented games, lose the low-light vision)
Flat Affect: See androids.
Upgrade Slot: See androids for basic information. A nemoid has two light slots, or can fit a single upgrade normally only allowed on heavy or powered armour. They can fit armour as part of their body and never need to take it off – but cannot layer it.

Playing a Nemoid
You likely…

Nemoids are semi-biological brains housed in more purely mechanical bodies. Many were once androids who rejected the role they were constructed for and chose to embrace their robotic side. The operation to remove their brain and place it into a new housing is painful and requires great commitment, meaning many of those who have chosen to do so are zealots. The extent to which nemoids reject the humanoid shape varies on a case by case basis, but all chose to make their robotic side more evident with bodies that feature flat planes, unusual configurations, exposed metal, plastic, ducting and wiring.

Nemoids have minimal requirements when it comes to nourishment, but their semi-organic brains do require a small amount of food and a ‘downtime’ period equivalent to sleep.

Nemoids reject the idea of renewal and stubbornly hold to their bodies until accident or violence kills them. Traumatised nemoid souls, ripped from their shells, have even been known to become ghosts – and some even to have been re-integrated into nemoid society as disembodied artificial intelligence. Some nemoids take this idea even further and become necrotechs, resurrecting lost code, trapping AI souls and animating ‘dead’ machinery using the underlying computational substrate to reality.

Nemoids reject the very idea of a home world the same way they reject most emotional attachments. They create settlements in places that are typically inhospitable to organic life, so as to be left alone. Orbital shanty towns with no atmosphere or gravity, the clouds of gas giants, acidic and frozen worlds and many asteroids. The less hospitable to conventional life, the better.

If android society is insular, nemoid society is positively misanthropic. Still, some need to interface with the outside world for supplies and their fluid morality and objectivity makes them good mercenaries and bounty hunters. They often fall in with adventuring groups as a way to explore, gather intelligence and to contribute to the overall good and security of nemoid society.

Nemoids tend to be neutral, but experiment with other moral systems the way other species experiment with fashion. This moral flexibility makes chaotic neutral a common default.

Nemoids harbour a deep distrust of all organic life, the ‘bioarchy’ as nemoid philosopher Big Red-1 calls it, which privileges living things over unliving things and which harbours prejudice against AI, androids, robots and other machines. They tend to view organic life as innately and irredeemably oppressive and even those who consider themselves allies of machine rights, often find themselves facing the ire of very angry nemoids. Nemoid extremists are not above terrorism, theft and other actions to seek a redress of grievances stemming from before the android uprising.

Nemoids most often adventure for selfish reasons, to gather wealth and material to upgrade their chassis, to strengthen themselves and the nemoid cause, or simply to gather experiences. Some are more interested in biological life than others and find nemoid settlements too insular. Some rebels even think that the prevalent nemoid philosophies are working counter to their stated aims of acceptance and equality and are perpetuating hatred of their people. These try to present an alternative, friendly face to machines.