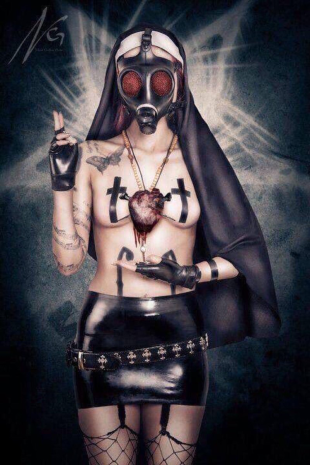 Apocalypse World, which the indie luvvies have all gone ga-ga over is an impenetrable mystery to me in terms of its appeal. Dungeon World does a far better job of explaining how it is all supposed to work and be played but it can’t overcome the central plank of fail that courses through the system like a dose of castor oil ravaging your intestines.

Characters in Apocalypse Powered games are, meanwhile, lumbered with a pretty restrictive set of ‘moves’ that channel them into a narrow set of actions. This is something that goes against the very nature and appeal of RPGs to me. This is ‘narrative’ chess, the horsey moves like this, the battlebabe takes on diagonals.

If there’re redeeming features to this game, they are that it makes a good workbook for plot-mapping and tracking, and that some of the artwork is borderline fetishy.

Otherwise, it’s a pretentious, bag-of-wank, ‘indie darling’ and when you don’t like it, people treat you like you don’t know how to use the three sea shells.

One response to “Bonus: #MayRPGQ2018 What is one setting or game mechanic that just ‘butters your biscuits’?”