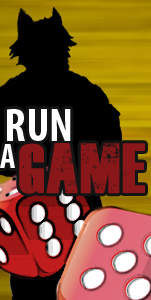 If there’s any scandals, censorship or ‘happenings’ in relation to tabletop gaming you’d like me to publicise (card games, RPGs, board games) then please let me know.

Big Bad Con is a smallish convention in Oakland California, which looks like a fun little convention. They’ve instituted a scholarship policy to help “support individuals who would not otherwise be able to attend the con” to get there. Which is a great idea in and of itself, conventions are expensive and there’s lots of people – low on money – who could benefit massively from some help to get to a con and get a break from the harsh grind of daily life.

“To support diversity at Big Bad Con, these funds have been specifically set aside for gamers from POC, women, disabled, and lgbtqia+ communities.”

Identity Politics, not circumstances or need, not poverty, will determine who gets assistance. An overtly discriminatory policy. There’s no reason PoC, women, disabled or LGBT people must, necessarily, be poor and unable to cover their own fees. The only fair determination would be need.

Now, obviously, people will consider pointing this out, somehow, to be discriminatory towards the stated identity groups, but that isn’t the point here. The point is that it’s a policy that places identity (race/sex/preference/ability) over need and – as such, is patronising, self-defeating and ignores the most important factor – need.

Credit where it’s due though, their code of conduct is relatively sane – something rare for conventions these days.

A call for more people to work on the new Conan RPG went out, the second call I believe, but whereas the first one to go out was a general, open call, this one was different – and Identity Politics was – again – the issue. 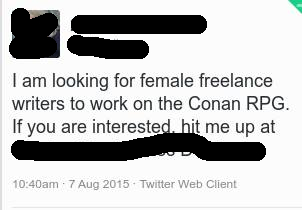 Now, this is a second call and the aim is, perhaps, to ‘diversify’ the people working on the project, but let us not pretend that any similar advertisement going out stating it was only for ‘men’ would not be met with a wall of condemnation. This is a perfect example of a double standard at work in the gaming industry and like other ID politics shenanigans only ends up causing problems.

Are people now being hired because they have Conan expertise, or because of the contents of their pants (or their self-identification) as one interested fan asked. Is it not patronising to reduce someone entirely to their gender when considering? Could this have not been done better simply, privately, at the selection level, or could it not be an open call with a mere note that women in particular are being sought?

Why should it make a difference anyway? Diversity for its own sake brings nothing and prioritising it over talent and ability calls everything into question.

I do not think that this is what is occurring here, but it is worth pointing out simply to demonstrate the double standard, and that double standard extends to reaction.

For a rather polite pointing out of the issue:

This isn’t OK. We all know nobody will do anything about it, but I just want to register protest. This kind of hiring practice is also, frankly, illegal gender discrimination. Boo.

I was subjected to all manner of abuse, much of it presumptive and sexist itself, all manner of wild accusations and nastiness spreading from one part of social media to another and not improving. Again, this is a demonstration of the hypocrisy inherent in this kind of activity.

The culmination, perhaps, was this:

People devoted to equality and diversity, using a person’s mental health issues in order to attack them, for the crime of pointing out sexist wording which, if the genders were reversed, these self-same people would be complaining about just as shrilly as they defend it and excuse it in this instance.

If there’s any scandals, censorship or ‘happenings’ in relation to tabletop gaming you’d like me to publicise (card games, RPGs, board games) then please let me know.