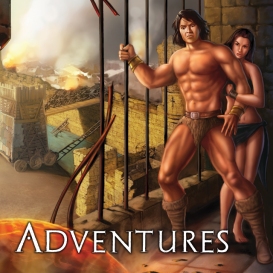 There was a challenge on an RPGnet to give 3 cool plot lines which riff off of Gor’s gender politics and which would make for a fun adventure.

This would be my answer:

1. A rich merchant’s love slave was taken from him by bandits during a raid on his caravan. She has since been sold and traded from hand to hand across Gor and must be tracked down. He’ll pay any price, but she never loved him but is in – mutual love – with her current master (when she’s found).

2. A punitive raid into the Northern Forests to deal with the Panther Girl problem ‘once and for all’ descends in a fantasy Vietnam. The Ubar behind the raid is driven by his own ego and his secret shame at having been caught by Panthers and sold as an oar slave in the past.

3. Drugged and enslaved the group awaken within the seraglio of a wealthy and powerful woman. They’re intended to be her house and silk slaves but escape from the compound may be possible – if they work together and work hard to gain the mistress’ favour.

Of course, there’s plenty to do on Gor to which its gender issues are almost entirely tangential. Almost any of the traditional sorts of stories and plots that drive any story can be used on Gor – and have been.

There are wars to take a side in.

There are things to steal.

There are criminal organisations, and crimes.

There are great beasts and strange monsters to slay.

There are bounties to collect.

The limits are your imaginations, without the bounds of the Gorean world.