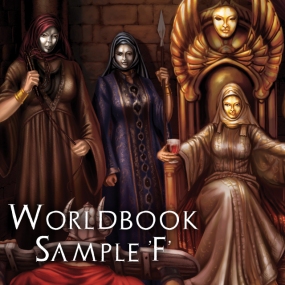 Free Women: The Gorean free woman is exalted and respected whether she is of low or high caste. Men show her deference and she often controls the budget of a home or business. Her position, however, is one that is extremely fragile. Free women are subject to enslavement in raids and war, through bankruptcy and trickery or as payment for debts. They are companioned for political and business reasons – though they retain their power – and can be kidnapped or killed for political ends.

With a woman’s beauty a currency on Gor most free women wear veils, hoods and all-concealing robes to hide their appearance from would be raiders, who are then more likely to pursue the obvious charms of slaves. Many even choose such slaves for their retinues and service in order to distract would be attackers.

Observations:
Never have a I met a more spoiled, entitled, shrewish and spiteful person than practically every Gorean free woman. From the lowliest peasant to the grandest Ubara, all of them treat slaves abominably, worse than their male peers do and swan about swaddled in their robes haughtily and imperiously treating everyone like crap. What beggars belief is that Gorean men go along with it and defer to women for the most part, at least so long as they are free.