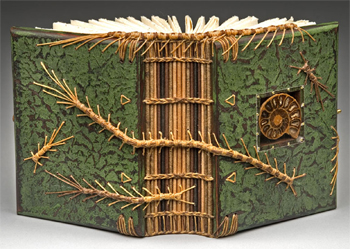 The ancient Magus Wars – though they go by many other names – have left many scars on the landscape. From enchanted ruins to luminous swamps, from gibbering aberrations to floating islands. During the wars the squabbling wizards created many servants, from the Brass Soldiers of Ludum Quat to the Invisible Hornets of Chung the Impeccable. Not every servant was built for war though and servants were made as cooks, handymen, workers, even curators.

The Encyclopedes were born in the laboratories of Dakram Findspell, more librarian and alchemist than true wizard. Obsessed by the gathering and collation – rather than the use – of knowledge he created the Encyclopedes to maintain and order his vast library.

After his death the Encyclopedes took on a life of their own and continue to gather information – especially spells – wherever they can. They create caches of knowledge and magic and devote their entire existence to it, to the point where they will happily suck the knowledge from a man’s skull to add to their own.

Encyclopedes knows almost everything and deep in their holdings they maintain a magical book of stupendous size. Each colony has one and – magically – it shares knowledge with all the other books and Encylcopedes throughout the world and the other planes of existence.

Encyclopedes gain an almost sexual degree of pleasure from correcting someone of their false information. They are insufferably smug, gigantic – the size of three people – and painfully arrogant.

It is said you can read their tome, after a fashion, their language is not discernible to any other being, but in the act of trying to read it you can gain the truthful answer to any single, answerable question. Reason enough for people to seek to Encyclopede’s out for trade – or theft.

Armour Class: 16
Hit Dice: 6d8 (Hp 27)
Movement: 180′, Encyclopedes can move at this speed on walls and ceilings as well as floors.
Attacks: 1 (+6 attack, 1d4 damage + Poison)
Damage: 1d4 + Poison that causes 1 permanent points of Intelligence loss.
Morale: 7
Special Abilities:
Can climb walls and ceilings automatically with no loss of speed.
Bite requires a Save Vs Poison or the victim loses 1 point of Intelligence permanently.
Encyclopedes can cast Bookspeak, Comprehend Languages, Detect Magic, Identify, Mending and Read Magic at will, as though a 6th level Magic User.
Encyclopedes can use scrolls.