This is a universe where everyone has an angle. Almost everyone is out for themselves and to get ahead. It’s a universe of chaos, destruction and struggle punctuated by a few islands of civilisation – and much of that is corrupt, decadent or despotic.

The Urlanth Empire has fallen and chaos has ensued as every prince, princess, duke, duchess, baron and knight who thinks they can take a shot at the title goes for it. Taking advantage of this every rebellion, criminal organisation, pirate gang, mercenary company and independent trader has made a ‘break for it’.

Newly founded colonies? They’re on their own.

There’s something about a woman that can kick your arse. Men too, strength, capability, that’s something that’s attractive to all kinds of people and – in this universe – things that aren’t really people as well.

This is a heavy metal aesthetic, leather and metal, rubber and plastic, big guns, big blades and probably an amount of big hair as well. This is album-covers, this is euro comics, this is Kirby and Brom, Tim White and Jim Burns, Moebius and Vallejo.

The universe is a run down, dirty place that has been lived in for a very long time by multiple civilisations that have come and gone and left their mark. Urban decay, desert wastelands, graveyard worlds, fire worlds, ice worlds, leaking asteroids and orbiting junk-stations.

This isn’t a future of gleaming control panels and flashing lights. This is oily, sooty, damp and covered in obscene graffiti in a thousand languages. People will do just about anything to survive and that means crime, vice, drugs, all the usual things that people resort to when they’re down on their luck.

Whether it’s a blaster or a knife, if you’re good with a weapon you deserve respect. Ranged weapons may be great for blasting away primitives but any civilised opponent has personal shielding and armour. Close combat is more effective, within the range of the shield and hey, guns break, run out of ammunition or get lost.

You might start off in a pressurised power suit with a repeating laser blaster and jump jets, but all too soon you may well end up reduced to trying to kill your dinner with a rock, in your pants.

More science-fantasy to be exact. As the old saying goes, any sufficiently advanced science is indistinguishable from magic. The real ‘magic’ will be through psionics and ancient high-science artefacts but the base-line tech will be graspable, usable, things within the bounds of relative plausibility. That’s just the baseline though and there are exceptions, races will be templates of different kinds that you can mix, match or even double-down on, but most are assumed to be humanoid.

MotSP will set its sights on the world of sleazy, sensual pulp Science Fiction from the likes of Metal Hurlant, creating a universe of heavy metal space opera (rather than rock n’ roll).

Rather than a single adventure and some ideas, MotSP will be a FULL GAME.

MotSP will give you ALL THE RULES you need to play.

MotSP will BULGE AT THE SEAMS with adventure ideas and toolkits to help you create and maintain your game and produce ideas.

MotSP will include fantastic art by Satine Phoenix.

MotSP will take your gang of wandering space-reprobates from the strip clubs of Proxima to the feudal planets of the Black Cluster. The glass spires of Imperial Space to the wastelands of scrap-worlds.

MotSP will take you from confronting elemental evil to delving the crypts of long-dead civilisations across the known galaxy.

MotSP is planned to include:

Why should you back us?

I am a full time RPG writer and author with a lifetime love of science-fiction comics, novels and fantasy art. If you’ve ever looked at a Tim White or Roger Dean illustration and been inspired to set a game in what you see, we have something in common.

I have a proven track record of producing great games in PDF and POD as well as selling through publishers such as Cubicle 7 and Chronicle City. I have worked for Wizards of the Coast, Steve Jackson Games, Cubicle 7 Entertainment and others and won an Origins Award (along with my writing partner Steve mortimer) for my work on The Munchkin’s Guide to Powergaming, the book that spawned the card game.

If nothing else, you’re guaranteed an amusing read with great art and that HAS to be worth a few bucks.

All funds donated will be used whether the project hits its target or not! If you’re donating, you’re actually donating! Whatever amount up to $1,000 is raised will go on art from Satine. Past that number we’ll start to reveal and trigger stretch goals and the money will be split 50/50 between art and payment to me for my time/effort (and driving lessons!)

Recently I uploaded three of my board/card games to The Game Crafter which allows for Print on Demand board and card games to be created. The only outstanding board/card game of mine that I haven’t yet uploaded is Lady Bexington’s Home for Wayward Zombies and that’s because the sales on this site – so far – don’t allow for it. I thought,though, it might be useful for people to get a look at what you get for your money and for me to offer a presentation both on the games themselves and on The Game Crafter as a site for offering POD board/card games through.

Steamed is my simple, fast game of steam-powered mecha duelling. The card quality is excellent, though the cutting is a little bit rough around the edges. The game board isn’t that thick but that’s not really a problem for this game. They offer larger boards for bigger games which look to be of greater thickness/quality. The cards are big and very well printed with excellent quality, though they are just a tiny bit thin for the card stands. Out of the box this isn’t a problem but later on with wearing you may find the cards sliding free of the holders. This version includes the Tactical Cards expansion, which are the little cards you see in the middle.

Cthentacle is the successor game to Hentacle and, overall, much better executed. This version of the game includes every character and every card from every set, along with all the optional rules. That’s a shitload of cards. Again the print quality is excellent though the cards are just the slightest bit thin. The cutting issues show up a bit more on the black-edged cards but really don’t look that bad. I consider this to be the definitive and best edition of Cthentacle, though I’m under no illusions that most people buy it to actually play 😛 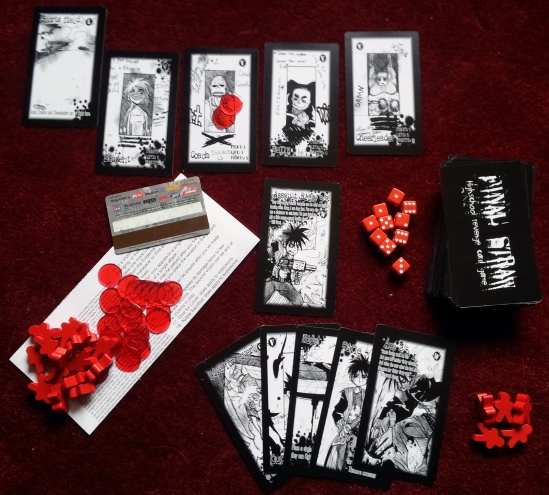 Final Straw is my game of highschool shooting satire. It was always going to be a controversial topic and I somewhat misjudged the American market. Europeans often find the whole US gun culture darkly amusing (gallows humour). The game is actually more about the aftermath and the blame game that goes on. In the Game Crafter edition the quality of the game comes through much better and the game pieces are excellent, though the little plastic round tokens are a little thin. The dice and the ‘meeple’ are great. Again the black border shows up the cutting issues, but these are minor. I would hope that the quality and value comes through in the hardcopy version.

The Game Crafter is great for running off proofs but does not seem to have anything like the same through-traffic that sites like RPGNOW and Drivethru do. There are promotional tools but they seem to have limited impact. For POD the quality can’t be beaten and it is probably worth taking demo sets that you get printed off to proof the games to conventions and so on. The major sticking point for anyone outside the USA is that the shipping costs are exorbitant. To order Cthentacle on non-priority, non-tracked post via USPS to the UK is $25.00 (£17.00!).  By comparison, I could ship through a discount shipping service, such as MyHermes, from the UK to the US for £3-4 ($6.00 or so).

For people outside the US TGC is only really an option for proofs of games and the die-hard fan. They really need to find either:

a) Other shipping services.
b) A European print partner.

Continental Europe is nuts for card/board games, surely there must be someone out there who’d partner with TGC?

Meanwhile, please buy these. I have fun making card and board games and want to make more!

From the author of the ‘100’ series of Adventure Seeds books, a new, shorter form source of inspiration for Games Masters. They might be adventures, non-player-characters, monsters, places… all ready to be dropped into your fantasy campaign, regardless of system.

Gladiators of the Stone Heart: An underground arena, a fabulous prize, a hidden motive. Enter the dark and battle for your life!

Take it With You: Tradition has it that great leaders are buried with their most loyal soldiers and servants. Some take this a little too seriously and if they are thwarted can become extremely dangerous.

Last Breath: A strange mask, an assassin’s legacy with a power – and a desire to kill – all of its own.

A Broken Band: Wandering bands of heroic tomb robbers can’t be the only kind of adventurers out there. What do things look like from the other perspective?

By Candlelight: In a war against the undead the bones of holy men take on a special value. They’re also heavily protected from the various unscrupulous forces that might seek to take advantage of the situation. Can you recover them and who will you give them to?