Here’s the systems map with overlaid white circles showing how far you can get with top-end conventional FTL drive in six months, and a year respectively. Which is a good way of showing which clusters can hook back up and form pockets of civilisation. Learning the secret of the Reaper Drives would double the range or halve the time but really someone’s got to crack the secret of the relays to bring back full-on galactic civilisation.

Multi-System power blocs with the resources and personnel to re-ignite galactic society might emerge at: 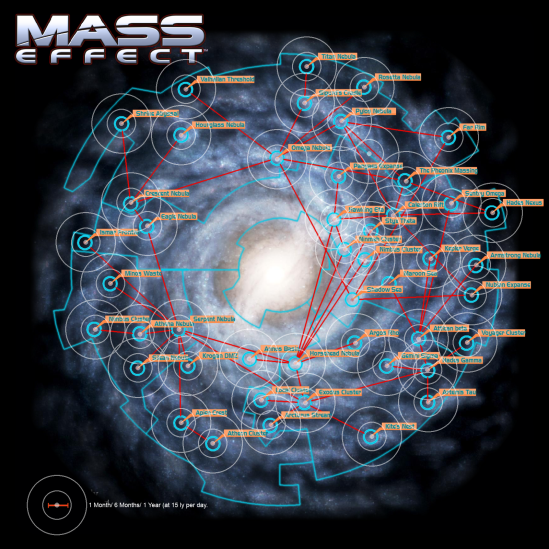 World building is a tricky business in gaming, presuming you’re going for some kind of plausible verisimilitude, but there’s a few things you can do to ground your game world and its various factors in ‘faux reality’.

A huge driver of innovation and development, a big concern for most governments is war and defence. There are a variety of ways to go, vast and cheap, small and specialised, drafting, training and so on but there’s little doubt that war both drives innovation and is amongst the first arenas to leap upon it. In our world, aeronautics, submersibles, rocketry, jets, computing, atomics, all these  things have a major interaction with warfare and associated research. When you’re bringing in a new technology or it’s equivalent you need to consider how the military would use it or what role they might have had in developing it.

How would people use this to fuck people up?

It’s not a new phenomenon though, photography and film were used to take naked pictures and pornographic films almost right from the get go. If there’s a way to get it on, or get off using it, someone’s going to do it. Whether it’s teledildonics or summoning demons.

How would people use this to fuck each other?

The last in this trio of things that’ll help ground your ideas is the idea of games. Technology and power is bound to be used for leisure. The more technology, magic and so forth liberates people from the necessity of work the more available and important their leisure time becomes and the more those advances influence leisure. Nobody at the time predicted that home computers would end up being such important leisure devices or that they’d be so powerful. Your job in world-building is to try and do better than those people in our past and to work out – at least for your game world – how these things might end up being used when people are on downtime.

How would people use this to fuck off?