The Mau-Mau Uprising is coming to an end with the state of emergency being withdrawn and the first movements towards decolonisation beginning. It’s been a messy decade or so of conflict at various levels in Kenya. All sides, British, Mau-Mau, colonial and Kikiyu loyalist came off badly in the conflict with many atrocities and human rights violations, executions without due process, acts of terrorism and murder as well as working prisons that have, in later years, been characterised as gulags.

The post-colonial peace and the status of the negotiations is under risk due to the actions of a Colonial soldier (Captain Withers) who is ideologically opposed to the end of colonial rule. He is being surreptitiously supplied with funds by CONDEM agents within the British aristocracy and government and is continuing his war against the Kenyans, ironically in much the same way as they had continued their guerilla war. If he pulls off an atrocity all the progress of recent years could end up demolished.

SWING wishes to deal with Captain John Withers and his colonialist supporters, preferably as quietly and with as little violence as possible. Better to bring him back as a prisoner to British shores.

Withers is occupying the forests around Mount Kenya along with his men and making hit and run attacks and assassinations upon surrounding villages and towns that were strong supporters of the Mau-Mau during the uprising. The agents will need to get to Kenya and explore the wilderness and the towns to find him, fox his attempts to create violent conflict and help create a more peaceful transition to post-colonial rule. All the while surrounded by colonial settlers who support Withers and suspicious Kenyans who resent and suspect their presence.

After the war a lot of soldiers became rather harsh school teachers. Withers is the type, but rather than accepting defeat and rejoining ordinary society he remained in the army and then when even that began to become ‘wishy-washy’ and ‘liberal’ he angled for colonial postings and eventually broke ranks. He’s a principled, honourable man, the thing is his principles are horrible and he’s a terrible racist.

Concept: Embarrassing Relic of the Empire
Honourable, with the right people.
White Superiority.
Tactical Genius.
They’re just bloody wogs!
They don’t like it up ’em.
I learned the jungle with the Chindits.
Anachronistic Gentleman.
Tough as old boots.

CONDEM’s chosen agent in the field, Marjorie smithers is an Amazonian, horsey woman with a braying laugh and a line in knee-boots and jodhpurs. She is psychotically devoid of empathy and regards other human beings largely as props. If she wasn’t so huge she’d be considered beautiful, in a rather toothsome upper-class sort of way.

A mixture of arch conservative Kenyans and militant settlers afraid of losing what their family has invested in the country over the years. 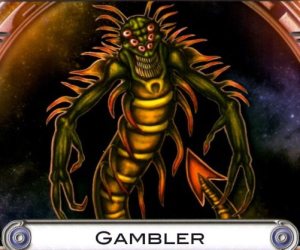 Arising in an era of geological turmoil, the Gamblers trusted only their own audacity. The faint of heart soon perished but the most daring rose to even greater effronteries and now launch a contest for Cosmic stakes.

Genetically Lucky: Gamblers may re-roll a roll once per game.

Social standing is replaced by Fortune.

Gamblers have the following traits:

Gamblers have a complex language due to their two-storey mouths, each of which can pronounce a different sound at the same time. Because of this most of their words are harmonies or clashes between two tones and very few words have more than one syllable. In their own language they are called the Shash/Shesh (the slash divides which is said by the upper and lower mouth). Theirs is a culture of risk-taking, gambling and luck and their world one of many upheavals. Over time, controversially it is claimed, they have evolved what is considered to be a mild fate-bending power of luck, and they certainly seem to have a higher degree of fortune than most.