Romantic fantasy is a difficult genre to pin down and there seems to be a lot of disagreement about what precisely it is. It’s beyond me to particularly define it without irritating one side or the other so I’ll have to talk in generalities about the tropes and conventions of the genre as I – and others – see them.

Romantic fantasy is much more structured around relationships. In game terms that means between the characters and between the characters and the NPCs. Events happen, kingdoms rise and fall, armies clash but the story will tend to focus on the effect this has on people’s relationships, a much more personal level than the broad and sweeping nature of other forms of fantasy.

Protagonists typically start out young and often follow a rags-to-riches arc (in either direction, or back and forth), they’re more often female – but not always – and they’re usually special in some way. Marked by fate, possessed of some special ability or a secret past.

Magic is typically not the kind of ordered, formula and study style of ceremonial magic as found in many other genres, but rather follows a more folkloric and simple style. Perhaps the ability to talk to or bond with animals (a common one) a form of empathy or telepathy or a making/crafting skill that borders on the magical rather than explicitly being so.

Creating the feel of romantic fantasy in your games is really just a matter of shifting focus away from the typical sort of combat or puzzle heavy encounters to the more complicated and tricky balancing of social concerns and the consequences of more direct actions emotionally and politically.

The best way to encourage this is to weave a background together amongst the player group before play starts and to give them plenty of links to the community around them in the game. Friends, family, a home, people and things to care about. You should also give NPCs and their motivations, thoughts and personalities much more emphasis than you might normally. I find it useful to have a quick little ‘cheat sheet’ for NPCs listing their main quirks, attitudes, mannerisms, accents and past experience with the characters so you can readily swap between them when you’re running the game without getting confused.

Romantic fantasy can provide a much more involved and rewarding gaming experience than other genres but out and out ‘fun’, in a conventional sense, is harder to extract from it. You really need a group that are willing to take the game a little more seriously and to make a decent effort in order to get the best out of it.

Examples of Romantic Fantasy include Mercedes Lackey, Robin Hobb and Tamora Pierce. Gaming examples are few and far between but Blue Rose bears mentioning as the only explicitly Romantic Fantasy oriented game that comes to mind. 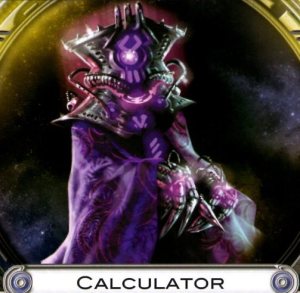 Defenceless on a jungle world, The Order of Calculators grew adroit at ensnaring their powerful but bungling competitors. Now adept at turning strength back against itself, they study the prospect of galactic empire, trusting that other, grosser beings will not also grow calculating.

Starport A, 14.4k km, dense atmosphere, 50% water (all as lakes, rivers, clouds and rain), population in the hundreds of millions, government is a meritocratic bureaucracy, law level 6, Tech level 11

Calculators have the following traits:

Calculators are the leaders of their people, an elite at the forefront of a society of planners and thinkers. In their robes and computerised armour of office they have access to massive amounts of historical and sensor data with which they can make their plans.

Calculators have a language of only two syllables, to non-calculators it sounds like a trilling or buzzing sound but is in fact a binary language made by the rapid flickering of organs in the throat, not unlike the purr of a cat. It is surprisingly rapid and almost compensates for the Calculator’s slow process of thought and planning.